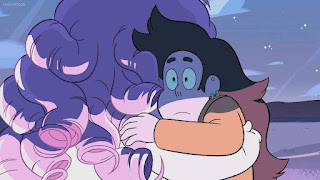 Something very different from my usual fare.  A safe for work (gasp!) Steve Universe fan fiction.  No size-y elements, except, you know, Rose is eight feet tall.

I've been thinking a lot lately about Rose and Greg's relationship.  By my own reckoning, they dated for at least four years, possibly longer.  We get to see the early stages of their relationship in a few episodes, and the very end in the video Rose made for Steven.  But what I keep wondering about, is what that relationship looked like two or three years in.

There were two of them this time.  Strands of hair as long as his forearm, curled around the bathtub drain.  Greg frowned, fished them out, then realized the bathroom didn’t have a garbage can.  He considered asking Rose to make one. Instead, he flicked the hairs back into the tub, and figured it was as good a place as any.

She was smirking at him sidelong the moment he opened the bathroom door. The blue light of the television cast weird shadows on her immensity, as she sat cross-legged in bed.  “You’re different,” she said seductively.

She laughed, in that faintly dismissive way of hers.  “That’s not how it works and you know it. Hasn’t Pearl given you her whole, ‘conscious manifestation of light,’ spiel?”

“I guess maybe she has,” he admitted, scratching the back of his neck.  “I really just heard, ‘magic space ladies.’”

“I love you,” she purred. The full weight of her attention fell on him, and she beckoned him closer.

“I love you too. And you promise that’s not going to change when I’m bald?”

“Of course not!”  The giant woman smiled at him as he sat at her feet.  Rose’s expressions could be a lot sometimes, when she looked at you from up close like this.  Partly because she was big, sure. But she just always looked so gosh darn happy. It made his stomach flutter. He’d never gotten used to it. And sometimes it could go on for hours, with her just watching him, grinning from ear to ear, adoring his every move.  Of course she watched lots of stuff that way.  Butterflies, infomercials, half-eaten hot dogs. It didn’t change how it felt when she looked at you.

“Do humans usually get so sad about the loss of a few little spindle proteins?” she asked.

“I mean, some of us, yeah.  You have to understand though, my hair is kind of a big deal.  It’s like, these gorgeous locks used to get me all the babes, back when I was on tour.  I was a real chick magnet.  It got to where I could hardly even focus on the music, I was so busy breaking hearts. That’s why I finally had to settle down with you, lucky lady.”  Greg shot her a pair of finger guns.

Rose smiled beatifically at him, not moving a muscle.

“I could get rid of some of my hair.  I’ll reform with a little less. One of the Gems could poof me, unless you’d rather do it? Would that make you feel better?”

Her expression didn’t change, but one of the pink whorls of her hair slipped off her shoulder.  It had taken him a long time to figure it out, but that was the best way to tell what Rose was feeling.  Those smiles of hers had a way of hiding things.  “I’m sorry.  What can I do to fix it?”

Her eyes brightened.  “I knew there was something you wanted.  What is it?”

Rose smirked. “Is that all Greg? Of course you’re special. And different. You all are.”

Her hair shrugged gently, which usually meant, ‘I’m confused.’ He watched her think through it, and her expression became reassuring. “You’re one of the most special human beings I’ve ever met.”

Oh boy, he had really stepped in it now. If he was smarter, or better at pretending, maybe he could make her think that was the answer he wanted. She was watching him so close, though. And she wasn’t going to ease up until she thought he was happy.

He swallowed. “Can I ask you about… the others? I mean, the humans you’ve… known?”

The curl beside her right temple flicked. Dangerous topic.

She laughed, and touched his hand. “What about you, Mr. Heart Breaker? Do you miss any of the dozens of girls you’ve left behind on the road?”

“I’ve literally never even held hands with anyone but you, and you know it. And you’ve been, I mean, dating a lot longer than I have.”

She smirked, dropping her chin into her hands and lowering herself until she filled his vision. His heart did a backflip. “Why, Mr. Universe,” she purred. “You’re not jealous, are you?”

“Then why don’t you let me show you just how special I think you are….”

She sat up abruptly. When Rose smiled, it was overwhelming. When she looked sad, it felt like the world was ending.

“I know that,” she said. “Is… that why you’re upset? You’re losing your hair, and it reminds you you’re getting old?”

“No.” He thought about how to say it, then took one of her enormous hands in both of his. “You must’ve seen it happen though. So many times.”

Rose bit her lip. She hesitated. Then nodded.

“Oh Greg.” She shook her head sadly. “Do we really have to talk about this?”

He squeezed her hand. “Please?”

She sat silently for a long time, not meeting his eyes. “Don’t ask me how many,” she said finally. “I’ve lost count of the people I’ve left behind. I don’t even remember their names, most of them. Isn’t that awful? But it’s what I love about human beings. They have their time in the sun, they grow and change. And eventually, they leave. That’s how it’s supposed to be, for your species. If I can make their time a little brighter….”

“You don’t miss them?” His voice was very small.

“I miss all of them,” she said firmly.

“Rose….” He reached up, and touched her chin. “You can tell me. You know. When you get sad about stuff.”

She shook her head.

“Because. If I spend time thinking about all the reasons I have to be sad, I don’t think I could ever stop. We have… now. This beautiful moment. I just want to appreciate it, and the time I have with you.”

She looked at him. For once, her expression was completely blank. “Anchovies,” she repeated.

“Remember when I convinced you to try them, and you told me how you didn’t understand why humans would intentionally put a gross salty fish on perfectly good pizza, and I said not everyone feels that way about anchovies and there’s no accounting for taste, and you said….”

He took a deep breath. “So. How about this? Knowing that sometimes your pizza is going to have anchovies, makes every other pizza you’ll ever have, better?”

She gave a sad little chuckle. “That’s some very good human wisdom. The only problem with it, is I think I’m already eating the best pizza I’ll ever have.”

He blinked, puzzling out her words. “Wait, really?”

Rose nodded. “Greg. I don’t want to be sad when I’m around you. Because we only have so long together. And I think I’m going to miss you most of all.”

She reached for him.

“So you do think I’m special-special?” His voice was slightly muffled.

Rose kissed the top of his head, and stroked his receding hairline. “You’re special-special.”

She held him that way, for a long time. There really was no doubt about it. Rose Quartz gave the best hugs in the known universe.

Eventually, his attention drifted to the television. Rose had apparently switched channels away from the old B-horror movie they’d been watching when he’d gone to take a shower.

She laughed, and held him tighter.

The screen was displaying a twenty-four hour news channel. A man in a suit was interviewing a dirty-looking man and woman. There was no sound, but from the big pile of rubble in the background, he guessed there’d been some kind of natural disaster that had claimed their house. Everyone looked pretty upset about it. The woman looked like she was trying not to cry on national TV.

A pair of children ran through the shot. They looked like they were playing some kind of game. There were enormous grins on their faces. Almost as big as the picture perfect smiles that Rose could make, when she was really, truly happy.

After a few moments, the kids ran by again. It took him a long time to realize that the footage was looping.

The television disappeared in a puff of pink smoke, immediately replaced by a serving dish. A fresh pie steamed in the cool, wispy air. “Ham and pineapple okay?”

“No offense Rosie? But food in here isn’t the most, um, substantial. Do you mind if we go out?”

“Not at all.” The pizza disappeared.

He let her help him to his feet, stretching. “Wait, shoot. I forgot the local place is closed on Tuesdays.”

Rose smirked. There was another puff of smoke, and a warp pad appeared at their feet. She reached down, offering him a gigantic, perfectly manicured hand. “For good pizza? We can do anything.”

Posted by pseudoclever at 2:46 PM No comments: