So I've been doing more 3D modeling.  Lately, I decided to take a break from any in-depth series work, and focus on introductions for some of my favorite Original Characters.  If you're a fan of my writing, though, the ones I chose to introduce probably aren't familiar to you.
Alana and Eve are two of my favorites, though.  They live in my head more than just about any other characters I've invented, in part because they have an extremely weird relationship.  Friends, rivals, colleagues.  An over-simplification: one is 'push,' and the other is 'pull.'
One of their two appearances was in my SizeRiot entry back in October 2020 - My Blue Heaven.  The contest technically disallows the use of OC's - sorry for cheating - so they appeared under different names in the original piece.  The contest called for writing about our favorite fantasy, an ideal world... and there was no other story I wanted to tell, than these two finding a way to reconcile their differences.
Here it is, with the names as originally intended.  Maybe, in context, it makes more sense now. 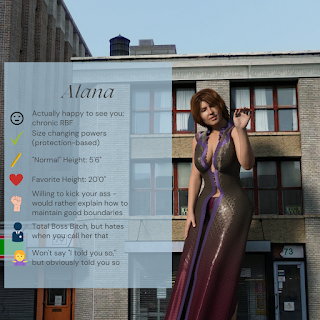 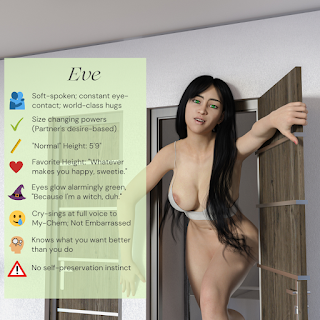 “You’re still looking ahead of us,” Eve says, giving me that knowing smile I’ve always found so irritating.  “Don’t do that.  Look at me.”

I try, because I promised I would do as she says tonight, and I keep my promises.  I still can’t tell if this is a good idea.

It’s involuntary though, and my vision jerks again and again to the path before us.  Looking for cracks in the sidewalk.  Fallen branches, curbs.  Anything Eve might trip over.  It’s just how I am.  It’s what’s required of me.  Especially around Eve.

A part of my attention is always looking for danger, because I know she won’t look for it herself.  I have, in the years I’ve known her, pulled Eve out of the path of no less than half a dozen oncoming cars.  And sure, she’s grateful.  Acts all solemn, thanks me and everything.  But these brushes with death haven’t made her the slightest bit more careful.

Eve is still watching me, and I made a promise, so I force myself to look only at her.  The night is cold.  My heart is beating fast.  She takes my hand.

“False.”  I sneak a glance ahead.  Crosswalk coming up.  Traffic’s in our favor though.  “You’ve tripped plenty of times.”

When I look back, Eve is rolling her eyes.  “You’ve never seen me fall, though.  Besides, you trip plenty yourself.”

That’s true.  I go silent, and she has the grace not to rub it in.

We’re at the street, and she steps straight into traffic, pulling me along.  There are butterflies in my stomach, but she’s watching me, and I don’t want to cheat.   There are no screeching tires, no honking or swearing.  On the other side we step over the opposite curb in unison.  It’s stupid, but in the moment it feels like the most intimate thing I can imagine.  She nods, satisfied.  “We’re almost there.  Are you doing okay?”

“I want you to do something for me, then.  Do you know what it is?”

“I can do it for you, if that makes things easier.  Do you want that?”

I consider it.  Eve could certainly help.  Force things on me, so all I’d have to do is lose.  But that would defeat the purpose of this exercise.

I come to a stop, careful to follow the rules, not take my eyes off her.  She turns, and we stand facing each other.  I take both her hands.  “Let me try.”

It occurs how we almost never stop.  Or bother to look  each other in the eye like this.  How we talk—or mostly argue—every single day as we walk together.  But always side by side, facing front.  She’s taller than me.  Not that it matters for people like us, but it gives me something to focus on.  I take in a deep, shuddering breath.  Then I let it out, exhaling my size along with it.

An inch.  Two.  Three.  Coming faster than I want, inelegant, like a muscle defaulting after overuse, and I know she sees this.  It’s embarrassing, unprofessional.  With an effort, I stop.

Even worse: it's still hanging between us.  That stale exhalation of breath, not dispersing in the breeze.  God.  I’ve apparently left her an offering.  Eve asks with a raised eyebrow what she should do, and I answer with the faintest hint of a nod.  She breathes it in, making fresh and verdant what was poison in me.  Gaining those inches I’ve lost.

I think of the carbon cycle.

It’s half a block to her apartment.  We don’t meet anyone, and it’s only after we arrive that I realize I didn’t take my eyes off her the whole way.

“Would you like to come inside, Alana?  It’s very important that you use your words.”

“Yes please.”  I emphasize it, shrinking again, overeager.  So hard to stop now that I’ve started.  I sink into my clothes, and Eve grows without comment.  Gentle now that she knows gentleness will do.  She holds the door.

Her apartment is warm, and better decorated than I’d imagined.  Eve apparently has a taste for antiques and curios.  So strange that’s never come up, when we’ve spoken what must be millions of words.  She comes up behind me, her chin gently resting on top of my head, and folds her arms over my chest.  It’s wordless comfort.  I fight the urge to let it all go, shrink down to the size of a teddy bear, let her hold me.  But that’s too much, I’m not ready for it yet.

“How do you want this to go?” she whispers.

“Why is it supposed to be easy?  Because it looks that way for other people?  All those oblivious little souls.  Giving in, letting big, scary Alana watch out for them.”  I can hear the smirk in her voice, but the teasing is good natured, and anyway she’s not wrong.  “It’s easy for me.  But that doesn’t matter in the slightest.  You don’t have to ‘win’ at this.  No one’s keeping score.  And we’re going at your pace, okay?  So, take a deep breath for me.”

I do.  When I exhale I shrink again.

“You don’t have to be strong tonight.  Or protect me.  I love you Alana.  I don’t say it enough.  I love your strength, the way you keep me safe.  It’s your best quality.  But it’s time for you to rest.  You’re safe.  And I would like it very much if tonight, for once, you let me protect you, instead.”

She’s in front of me now.  Towering over me.  Then kneeling, and I’m still looking up at her.  God, I’ve shrunk so much…

I swallow, studying my feet.  “Y-yeah.  It was Saturday night.  Remember, when it was really cold?  There was a… a stray.  She was hiding under a car, screaming her little fool head off.  And she was scared, so scared.  Probably knew deep down she was going to die of exposure, unless she found someplace to warm up.”

Eve’s drawing me in to a hug.

“So I went upstairs.  Got a box, and a blanket, and some tuna.  Set it out for her.  God, I must’ve spent half an hour.  Just talking in a soothing voice.  Telling her everything was okay.  That if she’d just trust me I’d take her home.  Keep her safe, and warm.  That I’d… that I’d save her.”

Eve is kissing me now.  Her lips are wet.  I must be crying.

“It took forever.  But she came out.  Meowing all the time, and so cautious.  They only meow when they want something from a human, did you know?  And she almost got in the box, Eve.  She was so close.”  I hardly have any strength left, and I’m clinging to her, and she’s holding me.

“She was three steps away.  I needed to scoop her into the box, just a little push.  Then shut the lid over her.  I knew she’d run if I moved.”  I laugh.  “So I grew instead.  Until I was big enough to reach.”

“That’s smart.  I always find animals just get confused when I’m growing.  But in my experience it doesn’t scare them, as long as I go slow.”

“Right.”  It feels nice to talk shop with her.  Familiar footing.  “They’re like, ‘Humans are always bigger than me, what difference does it make how much?’”

“Alright, so.  I’m reaching toward this cat.  Must be twenty feet tall, and it’s freezing.  My jacket is in tatters, and I’m wearing my favorite jeans.  It doesn’t matter.  I just want to save this cat so bad.  It’s all I want.  Just a few more inches… when I grow into some trashcans behind me.”

“I startle, almost fall, and… she’s just gone.”  I’m crying again.  Silent, and bitter.  Making a mess of Eve’s shirt, but it’s badly torn now anyway.  “Plus, insult to injury?  I got stuck like that.  I was too upset, couldn’t make myself shrink down for over and hour.  I had to curl up in the garage to stay warm.”

“Oh Alana.”  Eve sighs, and her hand covering my whole back as she pets me.  “Is that the last time you saw her?  The cat?”

“Yeah.  I mean, the next morning her food was gone.  I think she came back that night, after I left.  Maybe slept there too.  But, God.  I have almost unlimited power at my disposal, and I couldn’t even save one stupid animal.”

She touches my chin, makes me look into her eyes.  She practically fills my vision.  “You did though.  You gave her affection.  A meal.  A warm place to spend the night.”

“Alana.”  Her voice is surprisingly firm.  “You did good.  You weren’t perfect, you made mistakes.  Because you’re human.  No matter how powerful you are, no matter how big you grow, you can’t save everyone.  All you can do is try.  And accept that most times, you’ll fail.”

She beams at me.  And grows.

I could get that big, you know.  At least I think so.  I’ve never tested my limits.  On some level, I know that if I tried, I’d only crush it all beneath my feet.  That there’d be no one left to save.

As Eve carries me off to bed, she is my world.  And she can protect herself.

Remember: none of this changes things between Eve and I.  She’s too soft, and constantly makes little messes I have to clean up.  She’s not afraid to say what she thinks of me either.  That I’m officious, overbearing.  No fun.

Later that night, she thanks me.  I’m almost asleep, using her palm for a pillow, snuggled against the mountain of her chest.  “What for?” I ask, because I know she isn’t thanking me for the height—it isn’t as if Eve needs my help to grow.  And if it’s for the other stuff, that’s just rude.

“For being my kitten.”  She gives me a smile that is grateful, and beatific, and sad.  “You aren’t the only one who wants to save the world, Alana.  Or the only one feeling overwhelmed, stuck going about things the wrong way.  So thank you, for being vulnerable.  For letting me save something.  Even if that something is very, very small.”  She gives me a squeeze.  “Thank you for letting me be here for you.  Until tomorrow, when you’re here for me.”

Posted by pseudoclever at 9:10 AM No comments: