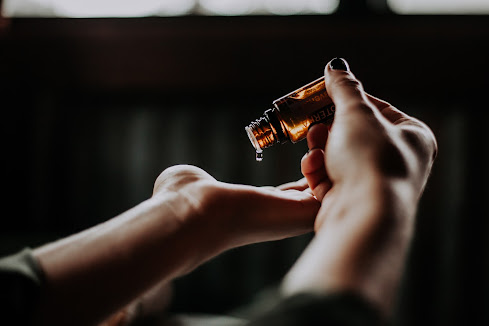 I was expecting the room Tiffany led me into to be an office, or possibly a stock room. It was nothing so mundane. The room was large and windowless.  The walls were lined with old fashioned wooden shelves, each one holding several nondescript bottles of lotions and potions. The lighting was low and indirect, coming from two fancy-looking shaded lamps standing in opposite corners. But the most prominent feature was the huge, vinyl table sitting by itself in the center of the room.

Tiffany strode across to one of the shelves, and without hesitation grabbed a small, familiar plastic bottle. “Here we are,” she murmured, turning the jar so I could read its label. I felt an electric shiver of anticipation rush through me. Written on the jar, in black sharpie, in the same handwriting as my bottle at home, was a 'plus' sign.

The giant girl set the bottle on the table. “Now Samantha, before you get too excited, I should warn you that there are several minor complications. First, know that, unlike becoming smaller, growing is a long, arduous process. It took me nearly eighteen months to go from my original height to my current six foot six.”

My eyes widened. “Wait, you're six six? You told me just the other day you were only six five.”

The amazon beauty flashed me a seductive smile. “You remembered the number, did you? My my.” She paused for a long moment, maintaining eye contact, making sure I had time to realize how I'd just incriminated myself. Finally, she went on. “In answer to your question, I’ve told you before that I'm still a growing girl. In fact, I did more than my usual share of growing just last night.”

So my suspicion was right – she really WAS bigger today. A thrill coursed through my body, a thrill with a distinct and unwanted charge of eroticism. I shook it off.

“I do have good news, though. My first few inches came fast. Extremely fast. I hypothesize that the smaller you are, the more easily your body will accept the serum. Most likely you’ll be tall enough to live a normal life again in only a few treatments.”

She nodded. “Now, as for why we're in this room, and the purpose of the massage table. The growth serum, unfortunately, does not work if you apply it yourself. I therefore pay a young woman to visit me three times a week to apply it for me. My Vanessa is an extremely skilled masseuse, and she makes the entire process very, very pleasurable for me.” She paused thoughtfully.  “As I intend to do for you. So, take off your coat and let's get started.”

A hot blush began to creep over my face. I held my long overcoat protectively against my body, feeling like I was shrinking all over again. “I'm...ahh...not wearing...I mean, I couldn't find anything else that fit, and....”

The giantess walked toward me, hips swaying, her large blue eyes never leaving mine. “You're naked under there, hmm? I was going to tell you to strip to your level of comfort.  But, there it is then.  So let me help you get comfortable.”

Slowly, Tiffany dropped to her knees before me. The larger woman was so close that when she bent, her long blond hair tumbled into my face. Even from her knees Tiffany was still slightly taller than me. This fact hit us both in the same instant, affected us the same way. I saw her face brighten, her pupils go wide.  For three full heartbeats we just stared at each other, reveling in our secret, shared obsession.

Did I rock forward on the balls of my feet, as if I longed to be held by this girl, this girl who was bigger and more powerful than me in every way imaginable? Did I purse my lips, wishing that she would press her own against them? And most damning, did I imagine what it would be like to look even further up to meet her gaze? Did I suddenly wish that I could become even smaller, more delicate, and watch Tiffany Ardeen grow taller and taller with every inch I lost?

Without another word, Tiffany began to unbutton my coat. After only the top two buttons, it slipped from my tiny shoulders.  The oversized garment caught against my chest for just a moment, before it fell away to pool around my ankles. I stared up at her meekly, completely exposed, feeling far less than my four foot nine. The larger girl looked me up and down for a moment, nodding her approval at my naked little body, my newly improved physique.

Slowly, one well-muscled arm wrapped around my hips. A long fingered hand reached down, cupping my ass, supporting it. And then I felt her hoist me into the air, as easily as if I were a small, lost child.

Again, the conflicting emotions. Anger and shame at being overwhelmed so easily. Fascination at her ability to do so. And the involuntary sex response that had me squeezing my legs together to conceal the pulsing wetness between my thighs.

Tenderly, she lowered me onto the massage table, face down. The vinyl was cold at first, but gradually it was warmed by my body heat. From behind me I heard a jar being unscrewed. I turned to look, but stopped as I felt a large hand pressing, not unkindly, against my cheek.

“Now, my dear little Samantha. There are three important rules to receiving a massage. The first...eyes must stay closed.” Tiffany placed two giant fingers against my forehead, and drew them down over my face.

“Second, be silent. Words are unnecessary, and talking disturbs the magic of a good massage. You will need to be moved as we go along, but I will not tell you when and how.  I’ll simply move you.”

There was a soft, crinkling sound, like fingers stirring is vaseline.  I smelled lilacs.

“Third,” she said, her voice a husky whisper. “And most importantly. Whatever you feel...enjoy it.”

Tiffany's first touch was just beneath my shoulder blades, and so gentle that it felt like butterfly wings fluttering against my skin. Her giant hands began to move down the small length of my back, pressing in slow, sensuous circles.

I moaned, in spite of my efforts to keep quiet, and felt myself relaxing under her skillful touch. I've had back rubs before but...she was just so skilled, and so big! Each of her hands covered nearly a third of my back.  Despite her size, Tiffany seemed to know exactly how hard to press – just enough to make me feel good, not so much to hurt me. Whenever she felt a knot or a place of tension she would pause, knead, stroke it, until all that was left was a tingling ease.

Gradually I became aware that my body was tingling. It was spreading out from each place she touched, growing and growing, resonating with the blissful sensation of her hands against my back. And soon after the tingling..the heat came.

The changes began. First, the rearrangement of my insides as my midsection tightened, improving upon my already fantastic curves. The tidal swell of my bosom was next.  There was a wonderful sensation of my breasts smooshing together as they grew, my upper body being steadily pushed up and away from the table. As if by accident Tiffany brushed her thumbs lightly against their expanding edges, causing a sharp, luscious bolt to arc from the place she touched, straight to my very center.

The pleasure of these changes came in pulses like the beating of an enormous bass drum. It seemed to reverberate through my tiny frame. And Tiffany's gentle, knowing fingers were amplifying it a hundredfold. I found myself moaning almost constantly, my hands balled into fists, my eyes clenched tight.

Again, my mind seemed to divide. A part of me, the honest part, felt clearly the next stage of my transformation, understood what was happening.  Welcomed it. This part of me was clever, devious. It knew enough to divert my other half – my inner prude, we'll call it – by letting it tread water in the ocean of ecstasy into which I had been cast. And so at first I only half-noticed the sharp contraction around my belly button. I only sort of felt my face slipping down along the vinyl and the glacial expansion of Tiffany's hands against my back. It was so easy to ignore these things as those hands slipped lower, as one of them covered both cheeks of my dwindling little derriere.  As they pressed firmly against my inner thigh. I let out a rapturous sigh, and as if by instinct my legs parted a fraction of an inch – wide enough to reveal the tiny, glistening pearl of wetness that I had been trying so hard to conceal.

Tiffany gave a soft little coo of recognition, but maddeningly, didn't take what I offered. Instead she pulled her hands away, losing contact with my body entirely. The moan in my throat began to sour into a disappointed groan, but before I could finish the sound I felt someone impossibly big and powerful grab hold of me beneath the shoulders. My head swam as Tiffany lifted me effortlessly, holding me upright with my feet dangling just above the massage table.

She pressed me tight against her bosom, with my tiny body nestled snugly between her enormous breasts. The gesture was so sudden, so intimate, and unexpected…that I broke a rule.  Before I could stop myself, my eyes fluttered open.

There was a mirror, faintly spotted with fog.  The source of the condensation still rose from my body in thin little wisps.  She looked directly at me, in the reflection.  And I looked directly at her.  She held me, silent, and merely watched.

In this way she let me survey the massive scale of the room around me, making sure I fully understood how she had tricked me, that I had been shrinking, not growing. And taking special care that I took in just how much smaller I had become.

Posted by pseudoclever at 9:47 AM