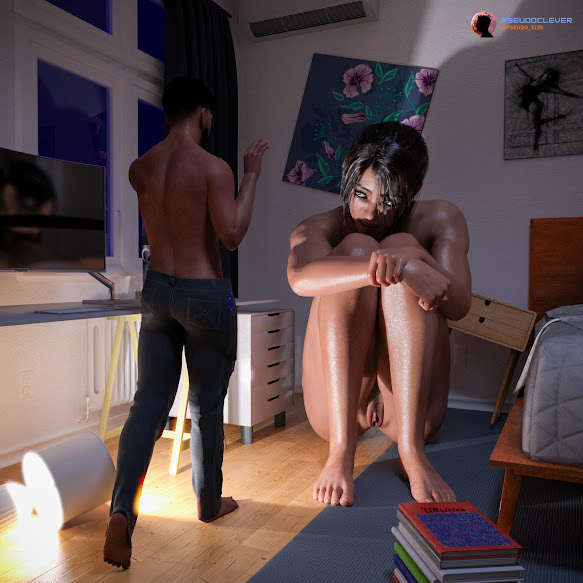 It was almost comical, watching Casey run.  His little legs pumping, his half-hard cock flopping in front of him.  He couldn’t have been much more than two and a half feet tall, and Jordan’s bedroom was a long way for a little guy to run.

Not that I made much better time.  My pants were only three quarters of the way up my thighs, and as hard as I was, it would’ve required serious concentration to zip up without hurting myself.  No time to just strip, either.  So I hobbled along, hopping from one foot to the other, holding my jeans up.  Like some not-safe-for-work parody of a three-legged race.

Casey reached Jordan’s bedroom first.  The doorknob was eye level for him.  He fumbled both hands around it, heaved, and managed to pull open her door.  The blue glow of a bedside lamp fell on him.  In that illumination, I watched his face contort in shock… just before he lost another inch in a sudden burst.

“No,” Jordan groaned, in that awkwardly deep voice of hers.  “Babe, don’t come in here, you can’t.”

The little man flinched, and took two quick side steps.  Getting out of the way, throwing his back against the wall outside Jordan’s bedroom.  It reminded me of the way a person takes cover in an action movie shoot-out.  “You’re not okay, though!”

A soft avalanche, like books tumbling from a shelf.  A whimper.  “I can’t stop it.  Can’t stop shrinking you.  I can hold it off like this.  But when I see you… as soon as I see you….”

By now I was standing on the opposite side of the opened door.  Casey and I exchanged a look.  Frightened, but determined.  By eye, we exchanged a plan.

I nodded.  And zipped up my jeans.

Jordan was curled up in the corner.  Her back was bent, legs drawn to her chest.  She seemed to be doing everything she could to make herself as small as possible.  She was big – though not nearly as big as I’d been expecting.  From the sounds of destruction, I thought she was about to burst out of the room, Alice in Wonderland style.  Not that she didn’t take up space.  Even sitting, as drawn into herself as she was, the top of her head reached past my shoulders.  She was completely naked – obviously nothing that fit her at four foot eleven would be wearable at nine feet – though I don’t think her posture had anything to do with modesty.

I held out both hands, and slowly advanced into the room.  “It’s okay.  We’re going to get through this.”   It suddenly occurred to me I had no idea what I was doing.  I didn’t know the first thing about how any of this worked, whether there was a damn thing I could do to help her in a situation like this.

I took another step closer to my giant friend.

Jordan shook her head, burying her face between her knees.  Squeezing herself tighter.  Sweat was absolutely pouring down her body now, soaking her hair, dripping freely onto the floor.  “It’s a self-defense mechanism,” she squeaked.  “I use it automatically when I’m threatened.  I can control it, consciously.  But.”  She yelped, and a sudden pulse of warmth went through my body.  “Scott, I’ve never been claustrophobic like this.”

I didn’t take my eyes off her, but I reached down.  Ran my finger along the waistband of my jeans.  They’d been painfully tight just a moment ago.  Now, they were definitely a bit loose.

She tried to back away, putting herself even further into the corner.  Her back hit the wall and she flinched dramatically, scooted until she wasn’t touching anything.  Her head rose higher.  I bit my lip,overcome by a sudden wave of vertigo as I shrank in a sudden burst.  Now the top of my head was level with her nose.

“You have to go,” she hissed.  “You and Casey.  Get as far away from me as possible.  I don’t know… don’t know how far will be safe, but I can’t stop this, can’t make it stop, please, I don’t want to get any bigger, don’t want to shrink you both to nothing….”

I could feel myself steadily losing inches.  I considered continuing to hold up my jeans, but they were getting heavy, and anyway I wanted to have my hands free.  I let them fall, and continued forward.  I hadn’t been shrinking for even thirty seconds, but already I was well under four feet.

I was close now.  I reached out, and laid my hand on her shoulder.  I held it there, as she rose higher, and I continued to dwindle.

“Hey,” I whispered.  “The ceilings in here are kind of low.”

She groaned, and swelled bigger.  I couldn’t have been much taller than Casey.  I was going to have to work fast.

“What I mean is.  Your dining room is pretty big, isn’t it?  And not to criticize your decor, but you definitely under-decorated.  It’s like you aren’t even worried that a fancy ten person dinner party could break out at any moment.”

She laughed weakly.  “Yeah, but you should see my liquor cabinet.”  Jordan shivered, as she stole another couple inches of my height.  My head sank to the level of her mattress, and I was obligated to shift my hand from her shoulder to her thigh.

I looked over my shoulder, and wasn’t surprised to see Casey coming to join us.  What did give me a bit of a shock, was how much bigger he looked.  He was taller than me again, and the height difference between us was greater even than when the night started.  I didn’t think the top of my head would even reach his chin.

Jordan’s gigantic hand took mine.  It was clammy, soaked with sweat, and covered half my forearm.  She squeezed, and both she and Casey seemed to grow as she stole more of my height.

It took a long time for Jordan to get herself uncurled from the corner.  She was gargantuan – far too big to stand in this tiny little room.  On her hands and knees though, she did have plenty of clearance.  Several feet at least.  Yet the way she moved, she might’ve thought she was twice her size.  And that the walls and ceilings were covered in spikes.

I stood on one side of her, and Casey the other.  She crawled.  Casey took over the role of soothing her now, telling her she was doing a good job, warning her about the edge of her dresser, about the pile of notebooks next to her knee.  I stayed silent, not wanting the rising tone of my voice to give away how much I was shrinking.  I was shoulder height to Casey.  Then chest-height.  He gave me the briefest of glances, a little reassuring smile.  And turned his attention to instructing Jordan on how to fit through the door frame.

“Okay.  You’ve got so much more room now.”  Casey quietly jerked me aside, out of the way of his titanness girlfriend.  Her knee came down, narrowly missing the place I’d just been standing.  She looked at least seventy-five feet tall to me now, so big she could easily have picked me up with one hand.  She was too scared to keep her eyes open, and had nearly crawled right over me on her way to freedom.

“Lay down on your back, okay?  The floor is cool.  Just breathe for me, sweetie.  Big deep breaths.  Everything’s okay.”

Jordan did as he said.  It was like watching a house collapse in slow motion.  She allowed herself to crumple, lowering herself to her thighs, then twisting, turning, carefully avoiding touching any walls or furniture as she found her way to her back.  She had to stretch out diagonally to accomplish this – she was taller than the room was wide, and it wasn’t a small room.  Then she lay there, taking deep, shaky breaths, her eyes narrowed to slits.

Casey, more than twice my height now, gave me a long, appraising look.  As he did, his hand grew ever so slightly in mine.  I was still shrinking apparently, but much slower now.  That was something.  I was right around a foot tall by then.  I probably should have been scared, but somehow, I wasn’t.

The giant man gave my hand a squeeze.  I remembered how the night had started the same way.  I smiled.

“Okay,” he called, raising his voice just enough to be sure Jordan could hear.  “I think we’re too small to go get your weighted blanket.  But I have another idea.  I’m going to touch you, okay?  Scott is too.”

She nodded emphatically, turning her enormous head to look at me.  “Sorry,” she mouthed.  I lost another fraction of an inch.

I shrugged, and rolled my eyes.  Miming an emotion for her – ‘Ah well, what are you gonna do?’

Still holding my hand, Casey pulled me forward.  He helped me climb up on her shoulder, then followed himself.  He was much larger, and that made it possible for him to lift directly onto her chest.  He moved, making space for me, and motioned me to join him.

I took a place beside him.  Taking my lead from him, the two of us spread out, from the base of her ribs, to a place just beneath her sternum.  Lying on top of her.  Letting our weight press down on her chest.

Jordan’s A-cup breasts rose and fell, each almost as large as I was.  We lay there.  Trying to be still, trying not to shift.  At first this was hard.  I could feel the jackhammer beat of Jordan’s heart with my entire body.  It throbbed and pounded, and I shook with it.  Casey put his large hand on my back, steadying me.

And then, we just.  Existed.

Gradually her heart beat slowed.  Her body, slick with sweat and too warm, cooled.  I was so close I could see every subtle sign of the giantess’s relaxation.  The muscle at the base of her jaw quivering, tightening, then relaxing.  The little knot at her temple slowly unclenching.  Her eyes, going from tightly squeezed shut, to gently, peacefully closed.

I would guess it was thirty minutes before the rhythm of her breath told us she was asleep.  At last I dared to move.  Rolling over, beneath the weight of Casey’s hand.  He turned to look at me, regarding me serenely.

The man… God.  Well over twice my size.  Handsome, and strong, a reassuring look on his face.  He was absolutely… gorgeous.

And, I realized, with a pleasant little thrill.  Even as big as he was, I wasn’t afraid of him.

When he reached for me, I opened myself, and moved toward him.  One hand slipped beneath my shoulder.  The other, around my waist.  He pulled me toward him.

Posted by pseudoclever at 4:16 PM